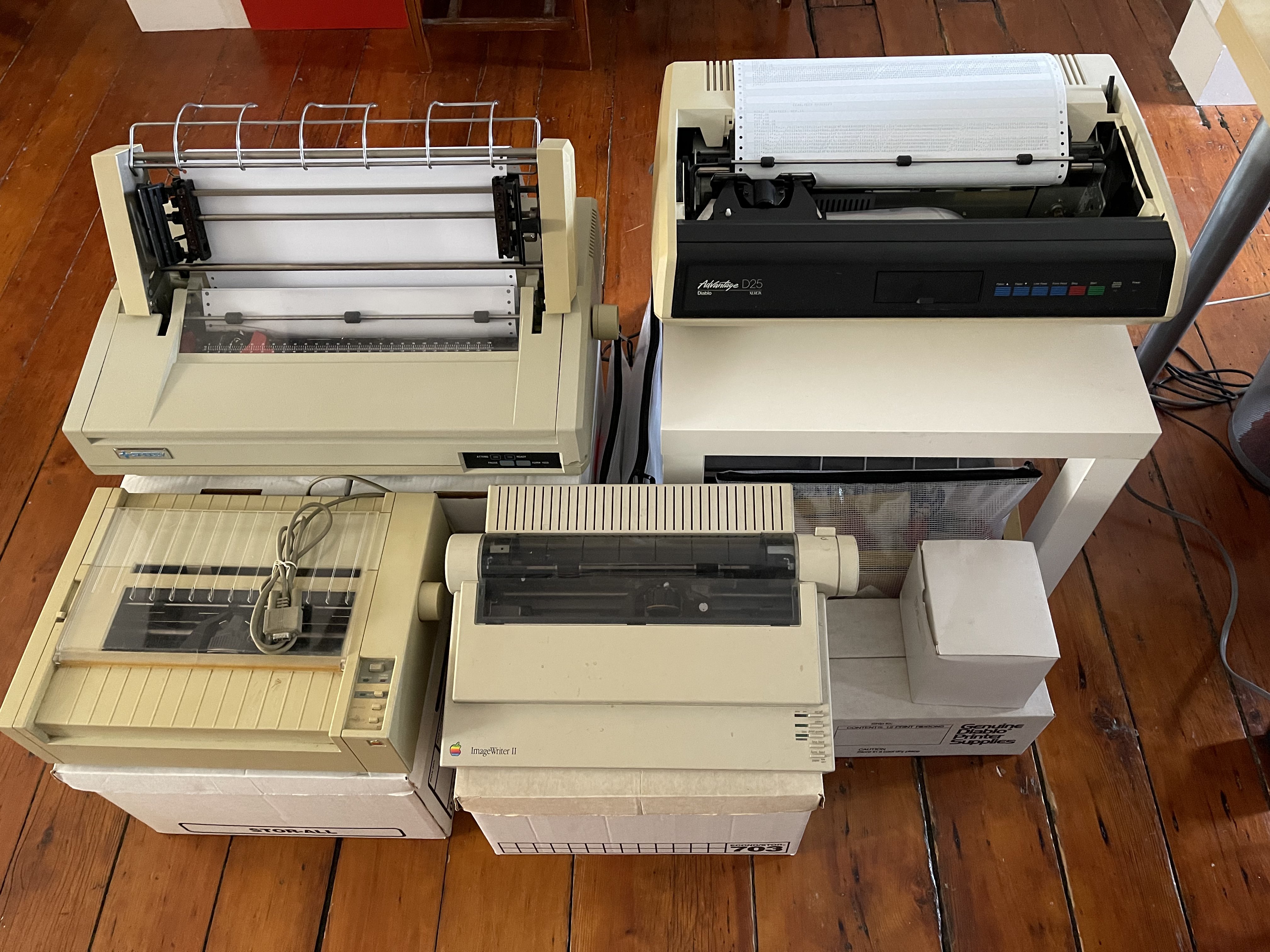 When it was written, the original Art1 output device for Frederick Hammersley was an IBM-1403 chain printer. (I'm uncertain what printers were used at the University of Minnesota, where Art1 was adapted to run on a Control Data Corporation 6500.) While I've altered Art1 to create images on the Olivetti teleprinter and create character overstrike images on laser printers, I began exploring the use of impact printers with wide-format paper carriages. I've focused on daisy wheel printers for their metal (plastic) type.

Below are the printers that I've tested and a few notes for each.

The collective noun for printers is a problem. You can see in the image to the right a small problem of printers.

An inexpensive purchase, the DWP-220 seems to have been manufactured by Ricoh. The printer is slow and loud, but runs pretty effectively over a 4800 baud serial connection with an FTDI chipset USB adapter. The limited character buffer means that flow control is a must. I've been using CoolTerm to send text and files. Repeatedly using the "I" character in a composition caused it to distort on the plastic print wheel. Two replacement wheels broke immediately. The carbon film ribbons are difficult to find, but print clearly. Supplies are available for the incompatible DWP-210 and DWP-230 models. The printer was sent to a retrohardware refuge in May 2021.

This is a parallel printer with Centronics interface. An FTDI-based parallel to USB adapter had it working on my MacBook running macOS 10.15 using the CUPS interface. The print carriage is smaller, just 360mm. Larger tractor feed wide-format paper cannot be fed through it. It was shipped in its original water-damaged and tearing cardboard box and didn't survive intact. I returned it to the seller, and after an escalation with eBay, got a full refund.

This is a 55-character / second daisy wheel printer that is relabeled as a Sperry printer. It uses Diablo print wheels. I'm in the process of getting this one up and running. The Sprint series used an interchangeable interface module for RS-232, Centronics parallel (IEEE-1284), or GPIB parallel (IEE-488). This model has a parallel interface with a PC-style 25-pin connector. I couldn't get it to communicate with a Prolific-based parallel-to-USB adapter, but I did get it working with an old laptop running Windows 98, and finally with an FTDI-chipset usb to parallel adapter on a MacBook pro.

The printer's self-test runs, but skips some characters in its barber pole output. The print quality is poor right now, with some characters lighter than others. While it could be that the ribbon is not advancing properly, the repeatability with some glyphs indicates something there is something wrong with the hammer force. Recently it ate a bunch of plastic wheels, so this one is heading for the repair shed, or possibly the scrap heap.

After time in the repair shed: I adjusted two set screws that limit the lever that launches the print hammer at the wheel. The hammer itself slides in a slot and is held back by a spring in an internal groove. By moving the rear set screw forward, I started getting letters to print. After some tests, I moved the forward set screw back to shorten the impulse driving the hammer. Together, these adjustments seem to tailor the timing and force of the hammer. So far I seem to have curtailed the print wheel damage. I'm running out of petals! After more work, I also think that the plastic paper guide was not adjusted properly and was causing petals to bend against the bottom of the aperture and catch the sides of the guide. I've adjusted this so that it presses against the platen and confirmed that it is well out of the way of the petals when they are pushed forward by the hammer. I observed another failure recently: on long prints, the ribbon sometimes hangs up and the glyph doesn't print. I currently only have the polymer "multistrike" ribbons.

Together with the Sperry, I picked up an AT&T rebadged Qume Sprint 11/55. The printer was filthy and the rubber timing belt (Chemi-Flex 514T83) that moves the print carriage had completely degraded into a sticky mess. The machine cleaned up and I tested it by transplanting the belt from the (semi-)working printer. It also ate print wheels, but otherwise ran through its tests. The elastomer washer that the hammer actuator rests on is tacky and deforms easily.

After a few weeks working with the Qume, it seems to be running fine. During one printing session, I observed the ribbon cartridge rotating down. I'm not sure if this is caused by the drive gears or the rotating print wheel, but it appeared to be the source of the missing letters. I simply taped down the back of the cartridge to the carriage and have been printing without issues and without more wheels being broken (fingers crossed.)

The Advantage is a slower and cheaper late entry to the daisy wheel printer market by Diablo (then a division of Xerox) just as laser printers were becoming popular. The printer has a Diablo API (All Purpose Interface) that services RS-232, IEEE-1284, and IEEE-488 on one Centronics 50-pin adapter. The test print is clear and supplies are readily available -- both ribbons and print wheels.

My original attempt to interface the 50 pin API interface failed because what I thought was a 50-pin Centronics adapter was actually a SCSI terminator. I had the machine apart and confirmed that the expected RS-232 pins are tied to MC1488 and MC1489 RS-232 drivers and receivers. While I'm waiting for parts to build an interface cable, I hacked open (literally, using a hacksaw) an old SCSI terminator and managed to connect to the serial lines of the printer. Here's what worked to build a serial interface:

Pins 23, 24, and 25 are output signals. These are connected internally to an MC1489 EIA driver on the printer's circuit board. Pins 47, 48, and 49 are input signals, and connected to an MC1488 receiver. A printer front panel switch is set to PTR RDY (not DC1/DC3). This uses the DTR / CTS control in CoolTerm. CoolTerm is set for 6ms delay between characters to help with flow control. The pin assignment document below indicates that RTS is pulled high. I measured +13V.

You can see from the assignments above that the printer is a little confused about whether it's a DCE or DTE device. From the receive and transmit perspective, the printer functions as a DCE (data circuit-terminating equipment) device. But "DTR" should be a signal sent from the DTE to the DCE. Instead, it functions like the "Clear to Send" (CTS) signal. Likewise RTS is held high internally by the printer, and DSR should be a DCE to DTE signal, but it is expecting input. Since the computer will always be ready, the line is held high by looping "RTS".

(*) If DC1/ DC3 are set, I do see it transmitting to the computer, especially when STOP / START is pressed. But it doesn't seem to do flow control very well, if at all. I was getting buffer overruns. When this happens, the READY light on the printer front panel starts to blink.

With the serial interface, the printer is running fine, with clear prints and no errors. It is slower than the Qume, but faster (and just a tad quieter) than the Tandy DWP-220. It came with a cut sheet feeder, which I'll try to get working.

Some months later, I finally built a parallel interface cable for the Diablo. It works with an FTDI-based parallel-to-USB adapter, although the machine is a little finicky. There is no way to disable an automatic line feed after 132 characters. But, this limit also seems to apply to unprintable characters, so I have to truncate 132 column output by one column. (There may be a software code to disable the automatic linefeed.) I also have to insert carriage returns manually into files before printing. The nice thing about the Diablo, though, is that I have a stack of cloth ribbons. The printed type from these has more character than polymer film ribbons (variation and a steadily increasing lightness.)

These are 7-pin dot matrix printers, and a common sight in many classrooms and computer labs in the 1980's. The sound of these and other dot matrix printers is distinctive and sure to elicit strong memories of Print Shop banners and printed school reports for those of us of a certain age. Both ImageWriters are serial devices, operating up to 9600 baud, and were given to me by the writer and computer historian Benj Edwards.

With the right serial cable in hand (a small benefit of compulsive e-waste hoarding), the ImageWriter II fired right up and I was able to print from an Apple //c. I have no plans so far for these machines other than to relive the glory days of fan-fold code dumps, directory listings, and Print Shop banners, cards, and posters.